Hi, I used to hang around here in 2003 or so! I've just got back to watching Knightmare - shockingly I've never seen all of it as I started watching at series 4, but with series 1-3 now having been re-shown I've spent some time catching up on what I missed. Series 1 started off using the same few rooms fairly repetitively, but as of series 2 I've noticed that the artists started chopping up some graphics and reworking them to form new rooms. Are all of these common knowledge by now in the community, or am I pioneering a new discovery?

Many of the clean copies of the original paintings can be found on David Rowe's site, which gave me clues about how they might have been recombined! https://www.davidrowe.net/davidrowe-television.html

I first noticed it in the first thing we see in series 2 - the Wheel of Fate room, when I saw the tiles on the floor were suspiciously mirrored. I then realized that it was the room called "Snake" on David Rowe's site, with the colours shifted, mirrored down the middle and with the back wall blacked out: 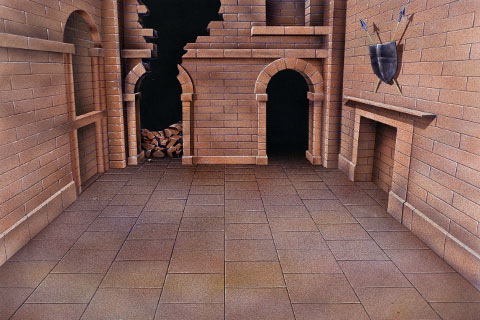 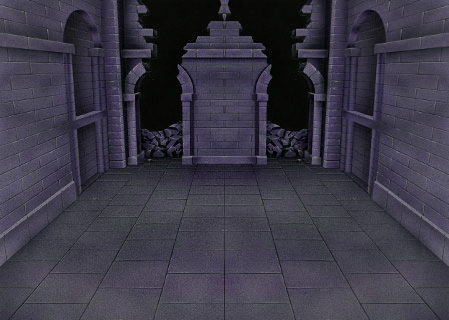 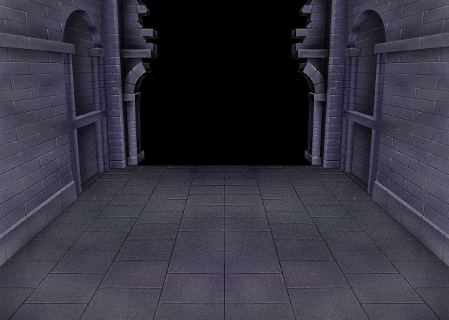 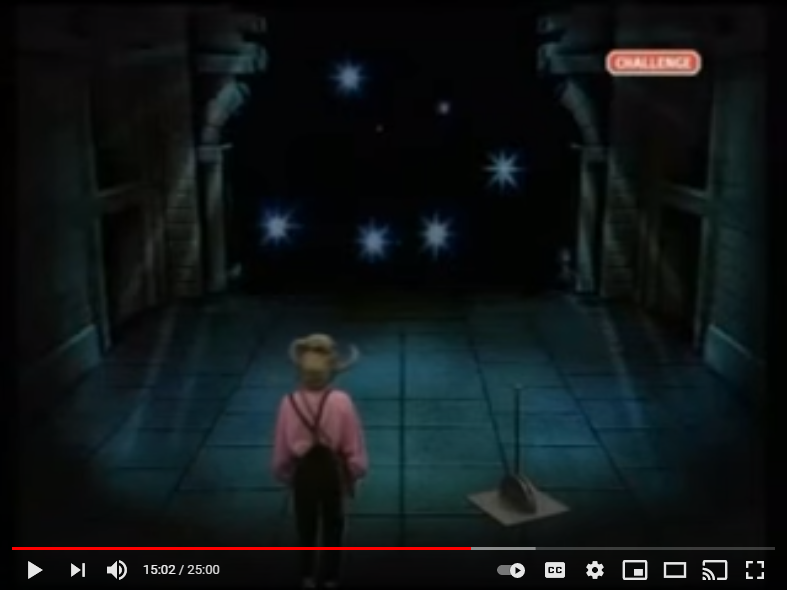 The room with the lion gargoyles encountered by team 2 was definitely based on Snake as well - you can see the ledge above the arched door, with some strategic use of Deluxe Paint to fill in the rest of the wall:

In fact, Snake gets a real workout in team 2's quest, appearing a third time for the room with the creature at the back. This time, you can see where the wall has been crudely covered with black boxes - it would have been far less visible with the fuzz of CRT. 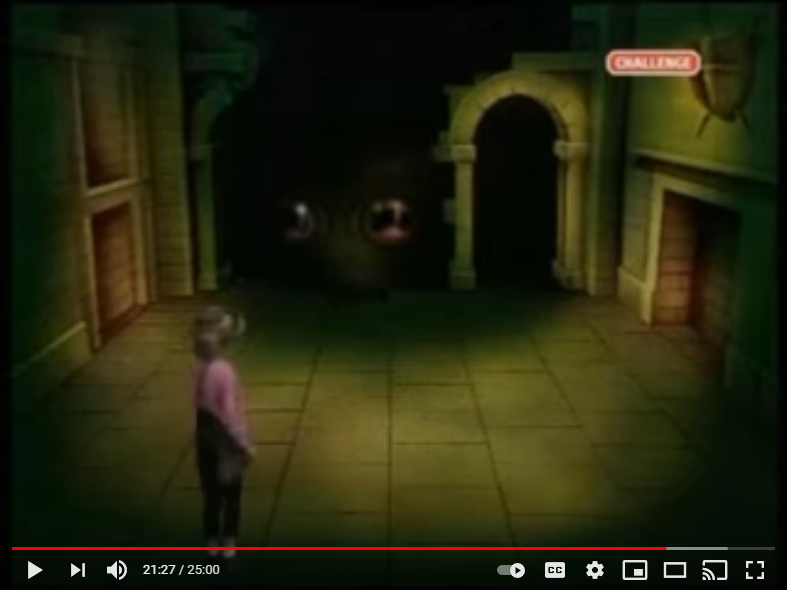 Team 3 got an interesting room which again is a mirrored-down-the-middle version of an original room (which they're put into immediately afterwards!) This one is called "giant", used once in series 1, and you can see it's already been doctored a bit for that appearance at the lower left of the path. This time, more rocks have been added at the front to make a path - and I'm not sure where they're from, possibly the deleted right hand side of the room? The effect is pretty convincing apart from the obvious mirroring. 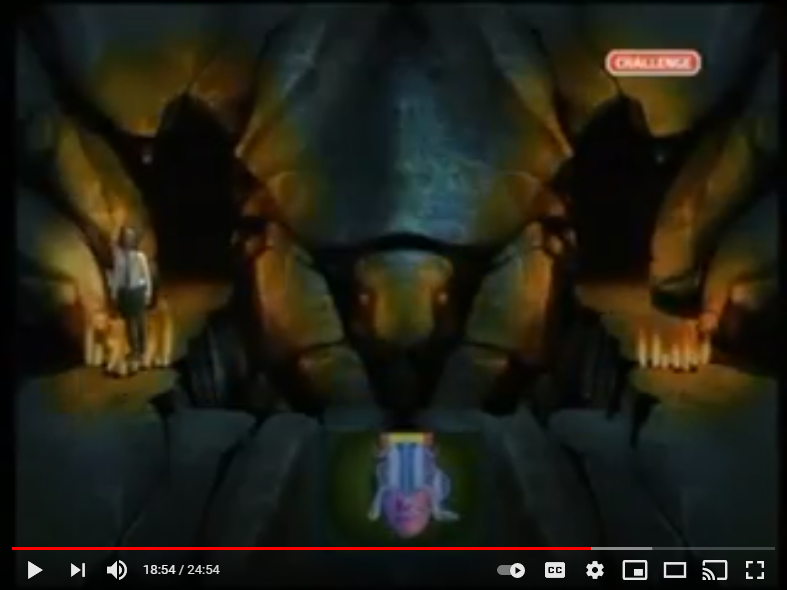 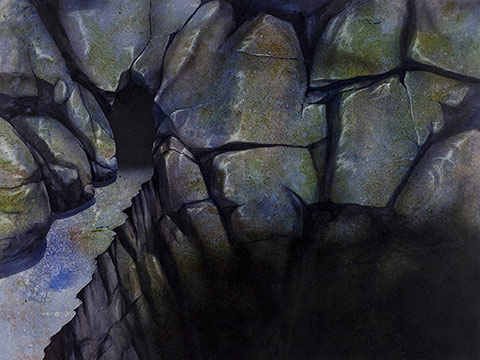 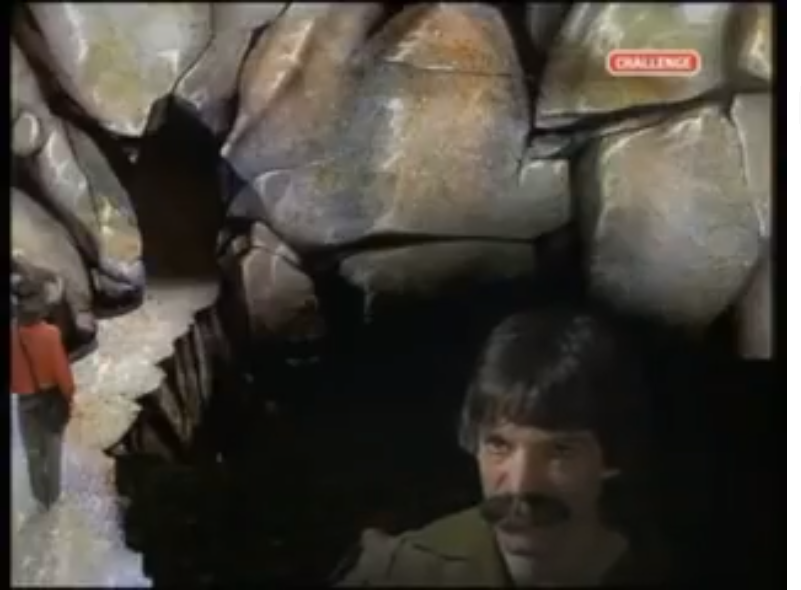 And then they're put into the most spectacular room yet, a very animated and computer game-y clockwork environment. The dark background that makes the wall came from the room called "chess", which we haven't seen in its full form in the dungeon yet. 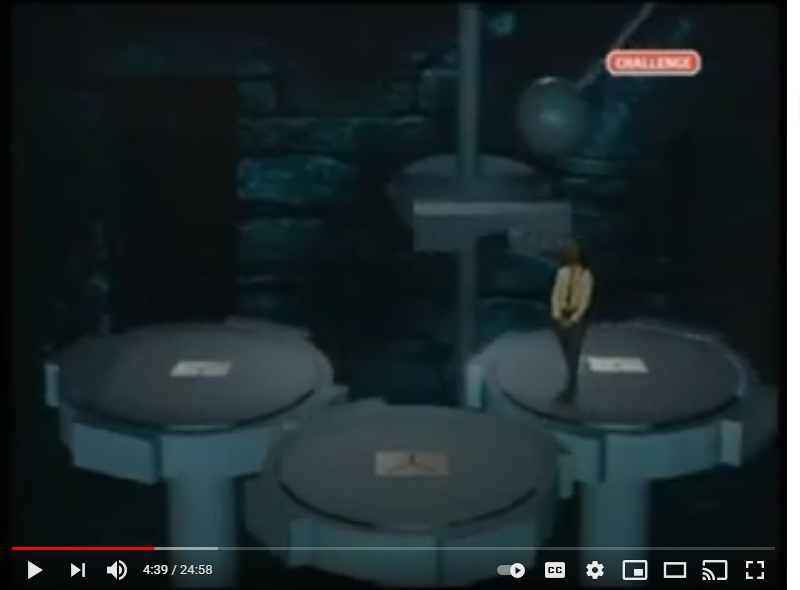 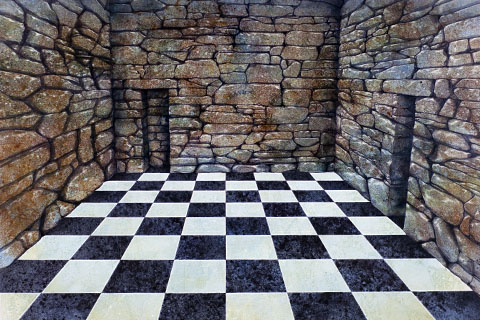 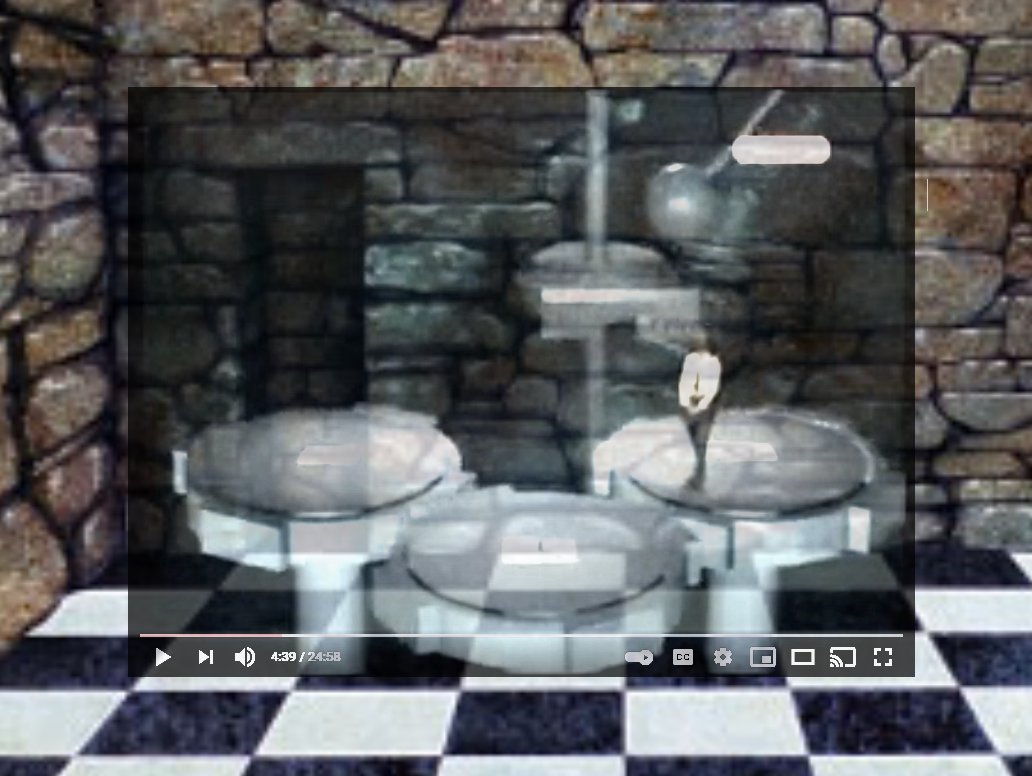 I commented on the fire cave being based on the giant's cave when I first noticed it, and David Rowe's book mentions how it was created. I was aware of the snake room being re-used for the Wheel of Fate, but I don't think I'd ever realised that part of it appears in the lion's head room - good spot! (That explains why the Lion Room artwork isn't featured in the book.) The Mills of Doom using the wall from the chess room is another one I'd never noticed.

I've done a lot of this sort of thing over the years with the later series - trying to figure out which bits of castles were used to create the Causeways and such like.

Hi again and thanks for extending your return visit to these virtual shores.

If there's one thing better than a Knightmare kick, it's a Knightmare kick that delves behind the scenes (or in this case through the scenes). Thanks for sharing this collection of observations. It's difficult for me to remember which reused room facts originated with David Rowe's book, which are from my own observations and which were noticed by other people (for example, this from Brett), but your post definitely includes some new discoveries.

One other thing: hope springs eternal that full Knightmare episodes will once more be available to watch legally (Challenge's rights seem to have expired; BritBox, with its growing library of children's TV series, offers new hope). To increase the chances of that happening, the less we say about illegal means of watching episodes — what with this being the official website an' all — the better.

The repurposing of Knightmare's artwork for Le Chevalier du Labyrinthe and El Rescate del Talismán is interesting too.
Top

Thank you! I've altered my first post and will be careful with this one - it's weird now to come back to a completely different era. When I was last here, virtually nobody on the board had even seen all of Knightmare, with fragments of it scattered across people's home video collections - I scoured the videos in my parents' cupboard when I was in first year of university, and hooked two VCRs together to compile a not-quite-complete run of series 4, 5 and 6, using the details from the Quests section of the site to identify where each episode fitted in the sequence. Now, post-ChallengeTV, the fandom has changed because we've now been able to see the thing that we're such fans of. I hope, too, that it can come back again.

I've also been wondering about the logistics of holding a quest at a convention or something - with careful selection of rooms, it seems the logistics of it wouldn't be impossible to recreate using a home setup these days...

Still. One more note, an easier one this time - this room with the stained glass is a heavily edited version of the level 3 clue room, with the walls and most of the floor cut away. (I also really like the look of the sketch for this room, but the huge curved stairs look pretty unworkable for someone blindfolded - I saw that David Rowe mentioned the same in his book!) 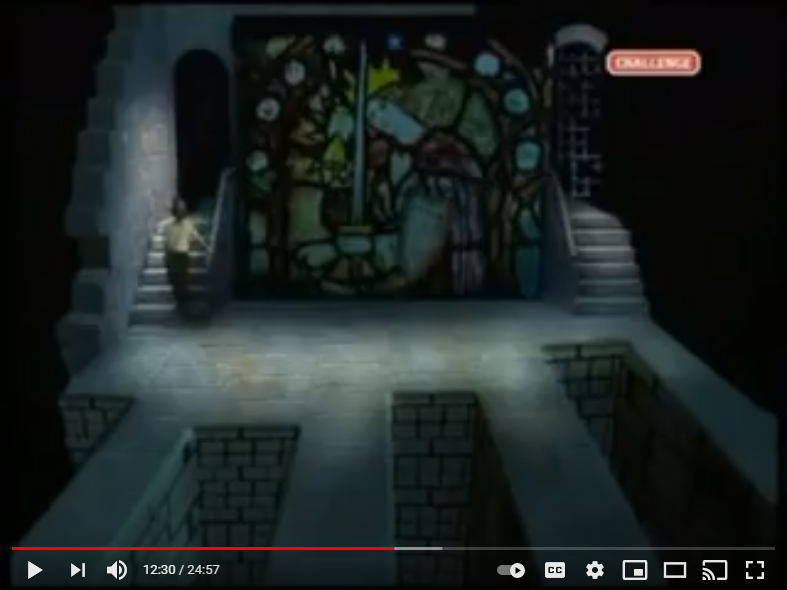 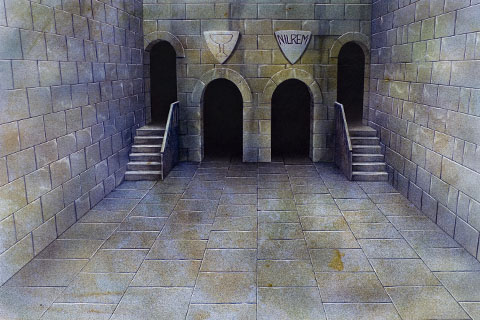 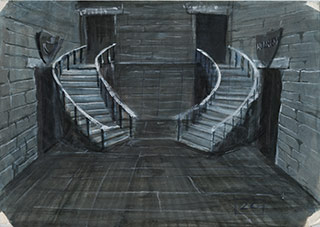 It looks like the room with the playing cards blocking the exits may also be based on the snake room? Either that or the grey 4 door room, I'm not entirely sure.

The background of the Medusa room looks like they've copy & pasted the columns from the 4 door room, and the floor tiles are either from the Level 1 clue room or Combat Chess. The central floor pattern has always intrigued me - I don't know where that's been taken from, or what exactly the symbol in the middle is supposed to be (maybe something snake-related).
Top
Post Reply
5 posts • Page 1 of 1